Maybe today I could have.  These taste like they were just cooked.  That's not always the case.  The place to go for nuggets is Jack in the Box.  They're ALWAYS freshly cooked, and they're cheaper.

Mc D's annual Monopoly promotion just started.  I'm planning on winning a Fiat.  But not today.  Today, I won a medium fries, although I did get one of the Fiat pieces too.  Probably not the magical impossible to find piece, but whatever.

There's some sort of manager training program going on in here.  There's nine people dressed in black with name tags wandering the kitchen and dining room taking notes.  Another woman is overseeing them.  After their inspections, they break up into groups in the dining room and are instructed to discuss "priorities" and "bravos" they noticed.  "Priorities" apparently means things being done wrong.  Bravos means things being done right.  It's like the finishing school of fast food or something.

The big "priority" apparently has to do with breakfast burritos in the cooler after breakfast hours.  The leader is having a hard time communicating to her students that breakfast burritos aren't served during lunch hours.  Seriously...they're not getting it.  I'm not getting why there's pre-made burritos at all.  Are they shipped pre-made, or do the restaurants pre-make up a bunch and reheat them to keep the drive-thru moving?  And more importantly, why do I care either way?  I NEVER order breakfast burritos.

Of course, nobody brought up the alarming price differentiation between 10pc and 20pc McNuggets.  I totally would have.

Not much going on.  Been staying home more lately.  The weather has turned more autumn-like.  Good open window nights.  Leaves are turning color.  Saw some beautiful pics of Utah fall colors.  Hopefully colors will still be in full swing when I get out there in a couple of weeks.

Werther's came out with a "caramel apple filled" version of their candy for the fall season.

They're freaking awesome.
Posted by tesg at 12:20 PM

I'm in line behind four guys making separate orders that are odd.  The last guy walks off without his receipt or change.  Smiling Counter Guy doesn't know what to do about it.  So he leaves it on the counter for the guy to pick up later (which he does when he gets his food).

Smiling Counter Guy disappears for awhile, then comes back and points at me without saying anything because apparently he wants me to order now.

Me: "One Doritos locos taco supreme..."

Me: "One Doritos locos taco supreme, no tomato..."

Him: "Okay, wait.  You want the one with the sour cream?"

Him: "I just want to make sure.  You'd be surprised, we get people who don't want the sour cream, they want the regular one..."

He went on for about fifteen more sentences, but I'd tuned him out by then and just waited for him to finish before processing an answer.

Here's the problem with interrupting my order flow...I'm easily confused.  When you jump in with some unexpected question, my brain basically shuts down and I start making irrational requests.  Then I end up with a taco topped with something ridiculous like pizza rolls.

When they called my number, the guy who brought my food to the counter said "Doritos locos taco supreme, extra tomato!"

He busts out laughing.  "Just kidding!"

He is, too.  Everything's made the way I ordered it.

This KFC Chicken Little sandwich...a mini sub roll (think hot dog bun) with a standard chicken tender with mayo and pickles...is pretty awesome.  At least with a very recently cooked tender, which this one is.

I guess KFC once had a different sandwich called "Chicken Little" that I don't remember.  But it has a legion of fans who were campaigning to get that one back and got this instead.  They're not happy. 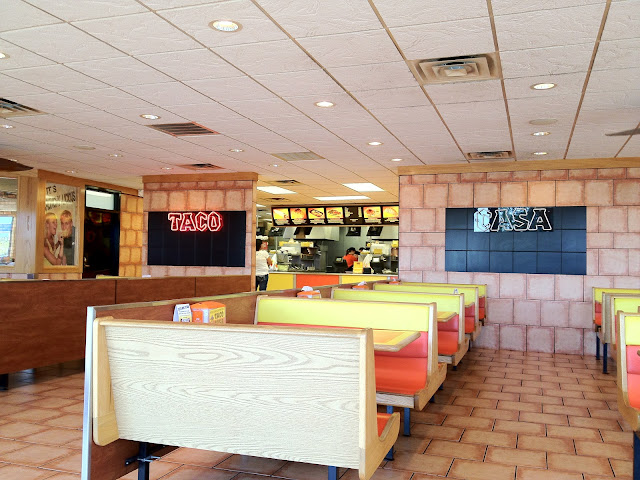 No freaking kidding.  Have you ever seen something so awesome in your life?

It was while having lunch that I saw the headline about the Jantzen Beach Thunderbird Inn burning down.  Wow.  The landmarks visible from the I-5 bridge are falling at a rapid pace in recent years.  The Waddles sign now touts Hooters.  Jantzen Beach Center may as well be gone.

The Thunderbird (the original Red Lion Inn) was an expansive property with multiple buildings (two of the six apparently survived the fire).  In its heyday, it was a beautiful top notch hotel and convention facility.  It's been closed for the past few years, supposedly in the way of a new bridge (though Walmart wanted to build there once.)  I saw some pictures taken of the interior just this year by somebody somewhere.  Still looked pretty nice.

I'm pretty sure I never ever even once set foot in the hotel, but the sprawling facility was instantly recognizable in my mind.  It was an impressive sight when driving over the bridge.  And hearing the news of the fire got me reminiscing about the Jantzen Beach area in general, at least as I saw it in the 80's and 90's.

Jantzen Beach started out as an amusement park in the 1920's.  One of the original investors was Carl Jantzen, co-founder of the Jantzen swimsuit empire.  The amusement park's amenities included four swimming pools.

In the 1970's, the amusement park made way for a shopping mall.  A merry-go-round from the amusement park dating back to the 1920's was installed in the mall, and is still there today.  The mall's history has always been sketchy at best (the whole area...shops, cars, condos...have always been targeted by thieves), but I liked the place.  There was always something just a little different about it.

It was the last place I ever saw a Whirla Whip vendor.  When Stereo Super Stores liquidated their Jantzen Beach store, I got a new pair of speakers for my '75 VW Dasher wagon (yellow with fake wood paneling!) for five bucks.  (The car had a factory AM-FM 8-track with stereo sound...the left channel being in the center of the dash, the right being in the right rear quarter panel.)  Even when I was living elsewhere, I'd drop in when visiting the area.

I have a memory from my childhood of being in the mall's Montgomery Ward looking at a small race track toy that was one uni-body piece of plastic with cars roughly the size of Hot Wheels. It had a mechanical pump winder that fired the cars from a rubber wheel peaking out from underneath the starting point, which upon contact, sent them flying around the track.  The motor made quite a racket, one that for whatever reason I hear in my head now when I play Tiny Wings.  When the birds drop into a dip and go flying, I hear that noise.  Every time.

Most of the mall was demolished in the 90's in favor of big box retail.  The rest of it is apparently going to be demolished (if it hasn't already) as part of a Target store replacement project.  (Target currently operates a weird 2-story store in the old Wards building.)

I wandered the remaining wing a few years ago.  It just made me angry.  They'd painted all the wood beams in a dreadful gray and navy color scheme.  Few businesses were still operating in there, mostly local mom-and-pop oddball shops.  The few 'customers' inside all seemed to be homeless people using the place as a daytime hangout.

At least they're claiming the merry-go-round will be salvaged...even restored.

Still, won't be the same.

And with the hotel gone, now even less is the same.
Posted by tesg at 1:30 PM