Things of the Year

Still using the Taco Bell order app.  Still freaking awesome.  App of the year.  Every walk-up format restaurant needs this.  And Apple Pay.  Everybody needs Apple Pay.  If your business supports Apple Pay, I'm probably supporting you more than I used to.

(Taco Bell does NOT support Apple Pay.  Yet.)

And now, here are all the other things of the year...

Fast Food LTO of the Year -  I'm kind of split here.  Hardee's started the year with the fantastic Bacon Velveeta Patty Meltdown.  Then Wichita-based Spangles came out with something called the Garlic Parmesan Bacon Cheeseburger.  A bacon-Swiss cheeseburger on sourdough garlic toast with grated Parmesan cheese.  A rare example of something that looked good on paper that actually came out better in execution.  The best burger Spangles has ever made that I know of.  I'm inclined to go with Spangles because they left it on the menu longer, but it's actually STILL on the menu and may never leave.  Which would be fine with me, but really wouldn't make it an LTO.

Fast Food Improvement of the Year - McDonald's switched from margarine to real butter on their breakfast sandwiches.  They taste SO much better that my intake of Sausage McMuffins increased from maybe a couple a month to a couple a week.

Oreo of the Year: S'Mores.  Or as I and the Price Chopper checkout guy called them, Smoreos.

Coal in Stocking of the Year - Campbell's started using new cans for Spaghettios.  Smaller cans.  Up to an ounce less Spaghettios per can, depending on the variety.  In related news, I'm a grown man who still eats Spaghettios.  As my father once said, "I blame your grandmother".

Movie of the Year - Mad Max: Fury Road.  What an amazing old school cinematic feat.  It IS a hard and gritty "R" rated feature, so if that's not your thing, I give you...

Alternate Movie of the Year - Shaun the Sheep Movie  The latest from stop-motion animation legends Aardman, a full-length adaptation of a series, is funny and clever enough for anyone of any age or nationality to enjoy thanks in no small part to its complete lack of dialogue.  You could play this literally anywhere in the world to any audience with no subtitles or overdubs and they'd get it.  How this movie wasn't an international sensation I will never understand.

Album of the Year - I was watching a local morning news/entertainment show when the husband and wife team of Daniel and Lauren Goans, aka Lowland Hum, performed.  I immediately purchased their self-titled (but not first) 2015 album.  And it's fantastic beginning to end.  Folky pop with vocals reminiscent of It's A Beautiful Day.

Dumb TV of the Year - Bones did crossover episodes with...Sleepy Hollow.  Suddenly, my Doctor Who-Downton Abbey crossover idea didn't seem so far-fetched (and would have been way more entertaining).

Dumb Commercial of the Year - If Chevrolet's ad where they shred everybody's cell phones were real, the next thing to go in that shredder would be that guy's head.  Instead, the guy goes on to show a vehicle with in-car wi-fi "that can connect up to seven devices."  BUT YOU JUST SHREDDED ALL THE DEVICES.

Sad Commercial of the Year - Are the Progressive commercials with Flo's family supposed to be funny or are they just supposed to depress us?

Welcome Back of the Year - Burger King brought back the creepy King in their ads.  I love the King.

You're Such an Easy Target of the Year - You get the impression that the guy who gets the job in the GE commercials is just one of those guys people can't help but mess with?

New Social Media Addiction of the Year - Periscope.  Because nothing's better during insomnia than watching other people with insomnia doing whatever in the middle of the night.  Especially the guy who set up a Connect 4 game in front of the camera and played me (and others).  That's just freaking genius.

You're Not Helping Your Cause Much of the Year - Pete Rose is still banned from baseball, but he has a new sports bar & grill...on the Las Vegas strip.

You're Missing the Point fof the Year -  Saw a story about a guy busted for taking upskirt shots of women in a store.  Several of the story comments were people suggesting he use a selfie stick to be less obvious.

Police Beat of the Year - 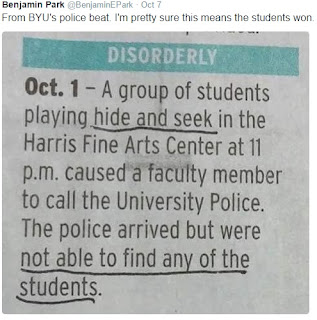 Dream of the Year -  Long before the Presidential campaign started, I dreamed I shared a table at the Peppermill with Robert De Niro and Donald Trump.  De Niro and I didn't say a word the whole time, but Trump WOULD NOT SHUT UP.

Fortune Cookie of the Year - "The one recognize the illusion does not act as if it is real".  Seriously...that's exactly what it said.

Like I Didn't Feel Old Enough Already of the Year - I got my first invitation to join AARP in the mail.

New Annoyance of the Year - Chester Cat figured out a new way to wake me up.  He jumps on the bed, does a rapid-fire paw dig between the bed and an exposed part of my back, then flies off the bed when I'm startled.  Moral of this story?  Stay covered.

Retweet of the Year - "Dear Couples Who Fight in Public, stop trying to whisper and would it kill you to include some  backstory" - @behindyourback

My 2016 Resolution?  To slow down.  I feel like everything happens in a rush anymore and I'm not really taking time to enjoy it.  Trips almost seem like going through the motions.  Maybe I should visit new places.

Frowning Counter Girl: "For here or to go?"

Me: "Bacon Gouda Cheeseburger, no lettuce, no tomato, cup of chili, medium drink."

Me: "With chili and a medium drink."

Meanwhile at the Coke Freestyle machine, a very very old couple is confused.  They selected a drink, but it won't pour when they push the button.  They are slow and frustrated.

Woman to me: "Do you know how this thing works?"

My food is ready.  The burger has lettuce and tomato.

Like most Wendy's special burgers, I'm not tasting anything special at all.  Mostly just the beef.

The big moment is nearly here.  "Star Wars: The Force Awakens", the first non-Lucas Star Wars movie, arrives this weekend.  Preview shows start tomorrow.  Reviews are coming out today, and are insanely favorable.  It's a guaranteed blockbuster smash.  Not that it needs to be...the thing HAS to have already made its budget back in licensing deals.  There's Star Wars themed Spaghettio's for freak's sake.

There's been a lot of social media discussion about the new movie.  One common question asked a lot is "if I want to catch up on the movies beforehand, in what order should I watch them?"  There's two common answers...watch them in the sequential order of events (the prequels, then the original three), or just watch the original trio and skip the prequels completely because they're awful.  And they are, despite what the serious hard core Star Wars faithful will claim.  I used to have a co-worker who was one of these people when the prequels were released.  Watching him try to justify the prequels being "not that bad" to others was hilarious.

But then I thought about "The Force Awakens" trailer.

"There were stories about what happened."

The new movie is set 30-plus years past the original trilogy.  It has new young heroes who clearly have no first-hand knowledge of the events of the past.  They're experiencing all this for the first time.

Perhaps you should too.

Perhaps you will find this all the more special if you go in fresh.   Then go back and watch the original movies after if you're curious.

So that's my suggestion.  Don't watch any of them.