Oh hey look.  Taco Bell has a new mutant menu item.  They've taken the chalupa and baked some sort of cheese substance into the shell.   Might as well try it, I guess.

I pull into the Taco Bell parking lot and whip out my phone to place the order on the app.  Taco Bell used to have a great app.  Then they switched vendors and made you download a new app and it sucks harder than a Dyson vaccuum cleaner.  It's just awful, and every bad quirk about it is on display today.

First off, it's forgotten who I am.  I have to login again.  This happens roughly 4 out of 5 times I try to use it.  This never happened with the original app.  It never happens with the McDonald's app.  Just this piece of crap.

I login and choose my nachos and taco from my stored favorites.  Then I go to add Pintos & Cheese.  You know, the little bowl of beans with cheese and red sauce?  Guess what...it's NO LONGER AVAILABLE.  WHAT???  There's NOTHING to this that is special to this item.  There's literally NO REASON to not offer it.  Unless they got too cheap to stock the little bowls, I suppose.  Cheap bastards.

I finish the order and the app thanks me and says "We'll see you soon" or something.  Then it shows the address of the store it sent the order to.  Guess what?  It ISN'T THIS STORE.  The app, which normally uses GPS to figure out where you are and assign you to the closest store (you know, like the one I'm sitting in the parking lot of)  sent the order to a store 11 miles away.

You have GOT to be kidding me.

20 minutes later, I'm at the other store picking up my food, which is packed to go because Taco Bell can't even be bothered with offering a "dine in" option on the app.

If people could get prison sentences for gross incompetence, I would hope the Taco Bell app team would be serving life sentences.  There's no hope for them to contribute positively to the human race.

Don't you love what Taco Bell considers to be "extra meat" in their crunchy taco?  They charge $2.79 for this. 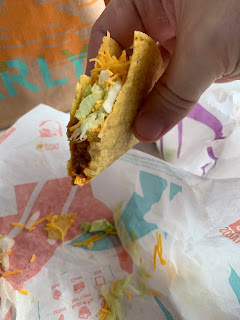 As for the Chalupa, it was underwhelming.  Just a new gimmick to grab attention, I guess.

Taco Bell should split itself into two divisions...Taco Bell, and Taco Mutant.  One with a simple menu of classics...regular tacos, nachos  and burritos made with regular corn shells, chips, and flour tortillas, meat, cheese, lettuce, beans, onions, and red sauce...and the Mutant with all their weird oddball crap.

Or I could just move to Taco Casa territory, where they not only keep to the basics, they do them far better than Taco Bell does anyway.
Posted by tesg at 12:30 PM