Wichita Eagle business columnist Carrie Rengers had a quote from a retired judge who performed a wedding for a couple in the McDonald's they'd first met at.  A McDonald's that had since closed.

Yep...they had their marriage in the kitchen of a long since boarded up McDonald's.

That must have been interesting.

I looked up the old building on Google Street View.  It was your classic mansard design unless you looked above it from Satellite View and saw the sloped roof in the middle.  Then you realized this was a heavily remodeled original McDonald's building with the big golden arches going through either side like handle bars.  Red and white tile.  Walk up only or maybe very limited seating in front of the counter.  They just built a mansard around it, adding a dining area and drive-thru.  Much like one of the McDonald's of my childhood.

This particular location was the second McDonald's in town.  The first (in all of Kansas, actually) opened in 1960 and is still in business, but the building there is of the new nondescript variety.  The mansard it was remodeled from may have been a ground-up rebuild.  Not sure.

The mansard-style McBuildings are on the way out.  And this got me thinking of them.  So I decided to have lunch at the oldest one in town I know of, even though it's been completely bastardized over the years.  The brick is painted white.  The roof is painted red.  And the dining room is one big expanse of brown, brown and orange-brown, with metal chairs that have brown wooden seats.  But I can close my eyes and think back to the days when it might have had the 80's "Jungle Concept" interior.  Green and cream and fake foliage everywhere.

In other history news, it's time for the year in review!

Album of the Year - A number of my favorite artists released new material this year, but nothing really stood out as earth-shattering.  I guess I'll give the edge to Gary Numan's "Splinter - Songs from a Shattered Mind".  It was pretty great and gave Numan his best UK chart activity in years.  Also, I got to meet him.  He was surprisingly engaging.  We had a fascinating conversation about a wolf.  (NOT a joke.).

Movie of the Year - It was a great year for sequels, but like Album of the Year, I can't pin one down.  "Fast & Furious 6", "Iron Man 3", and "Star Trek: Into Darkness" were really freaking great.  New original material?  Kind of short this year.

I Wish This Word Would Go Away of the Year - "Selfie". It just sounds gross.  It drives me as nuts as the religious term "gird your loins".  Keep your loins to yourself, pervert.

Costly Maintenance Mistake of the Year - Mechanic: "You need to replace your (car) cabin filter every 20,000 miles.  That's what fried your air blower."  Me: "WHAT cabin filter?"

Poorly Executed Innovation of the Year - My favorite hotel in Vegas changed their room key cards from magnetic stripe to RF readers.  But they won't read unless you take them out of your wallet, and even THEN it's kind of iffy.  What's the point if you have to take them out of your freaking wallet?

Reason to be Worried on a Flight of the Year - Flight Attendant to Pilot: "Are you feeling a little droopy dog today?  Don't worry, it's under 900 miles."

Dumpy Hotel of the Year - Guy two doors down from me complained to the front desk about ants.  Desk clerk resolved the situation by handing him two cans of ant spray.

Restaurant LTO of the Year - Gotta hand it to Arby's.  That Smokehouse Brisket sandwich was a thing of beauty.

Bad Restaurant LTO of the Year - Subway brought back the Big Hot Pastrami, which I used to love...and it was AWFUL.

Bad Restaurant LTO Etiquiette of the Year - White Castle offered grilled chicken sliders.  Not available at breakfast.  Which makes perfect sense since literally everything else on the menu is.

Fast Food Discovery That Already Existed But I Just Discovered of the Year - Original Tommy's breakfast burrito.  A pound or more of sausage, egg, hash brown, cheese, and chili.  It's so BIG.  And so HEAVY.  But I CAN'T STOP EATING IT.

Bad Restaurant Menu Move of the Year - The local smashburger stopped selling chili.  And I stopped going there.

Dumb Restaurant Logo Move of the Year - Wendy's moved to an 80's lipstick font logo.  Why?

Long Overdue Restaurant Move of the Year - You know that Taco Bell in an old Sambo's building I complained about for years and years and years?  THEY DEMOLISHED IT this summer!

That was Quick of the Year - The family who owned longtime and locally loved Scottsbluff, NE staple Taco Town relocated to Wichita and opened up shop there.  Didn't get to try them...they lasted two months.

Bad Etiquette of the Year - Don't you hate it when somebody within earshot of your desk replies "LOL" to your e-mail when you know for a fact they DID NOT LOL?

Budget Cuts of the Year - After 18 years, I discontinued DirecTV in favor of going free OTA only.  Six months later, I don't miss it.  At all.

TV Commerical of the Year - The FedEx ad with the golf-loving death metal band.  "As far as your fans know, you are only capable of HATE."  "I don't hate golf." One of FedEx's best ever, and that's saying something.

Bad Commerical of the Year II - Am I the only person in the world who really wants to beat the crap out of the smug teacher in the Microsoft Surface commercial?

Bad Commercial Jingle of the Year - "Bigger Better Bob Brown...Bob Brown Auto" to a disco beat.  SHUT UP!  SHUT!  UP!

Missed Commercial Opportunity of the Year - You know that Delta faucet commercial where a guy is using a variety of touch faucets as a drum kit?  That would have been WAY more impressive if they got Neil Peart to do it.

Uncomfortable TV of the Year - It always gets awkward when Joe Buck flirts with Troy Aikman on camera.

Feel Better About Yourself of the Year - Ever find yourself feeling down about your place in life in comparison to everyone around you?  Just go people-watching at Aldi.

Personalized License Plate of the Year - "W ENVY", on a green Camaro

Random Unsolicited Advice of the Year - "THERE AREN'T ANY FLYING MONKEYS!" Building maintenance guy at the office shouted at me from the roof

Office Courtesy of the Year - Girl holding door open for me: "Right this way, sir."  To the guy behind me: "BUT NOT YOU."

Retweet of the Year - "So 18 million people watched that Sound of Music thing last night and everything I've done has been canceled."  - @JewelStaite
Posted by tesg at 3:00 PM

I saw the Big Hot Pastrami ad over the weekend and was terribly excited.  It's been a few years since Subway's done the pastrami thing nationally.  So that was my lunch plan for today.

I actually taste the staleness of the bread more than the pastrami itself.

The soup's okay, though.  I don't go to Subway much and I'm not sure when they decided to carry soup.  Apparently the cashier isn't either, because when I asked for soup, she had no idea what I was talking about.

The girl who made the sandwich (aka "Subway Sandwich Artist") did, though.

Woke up at four this morning.  I did so because Chester Cat decided I needed to be up then.

This happens when I return from long trips.  The cats tend to be more demanding for awhile, and I was just gone for ten days.  (They're not left alone, I have a cat sitter who visits them periodically.)

Anyway, Chester's method for waking me is to sit in front of my face, purr loudly, and slide his paw in and out of the space between my face and the pillow.

In this case, it led to him being shoved off the bed.  I'm grumpy enough on a good day.  But I currently have a sinus cold going on, so...

Ten seconds later, he was right back in my face, purring, doing the paw thing.

Then Maggie Cat appeared on the other side of me, looking at me like "Well? Are you up yet?"

So I laid in bed for awhile and pet them.  Then I got up and fed them.  They were SO excited.

I'm about halfway through the work e-mails for the past week.

And about half past sleepy.
Posted by tesg at 11:30 AM

I was here earlier in the week for dinner and my eye spied the Enchiladas Rancheras on the menu for the first time.  It's two cheese enchiladas covered in sauteed mushrooms, "salsa ranchera", and more cheese.  I tried it.  It instantly became my new Red Iguana favorite, and that's saying something.  I had to have it again before flying home. 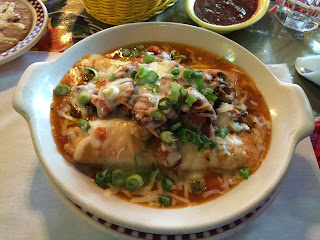 
If you're ever in Salt Lake City, you MUST try Red Iguana.  It's a Diner's, Drive-In's, and Dives kind of place (in fact, Triple D has been there.)  The original location is so popular, they opened a second location just a couple of blocks away to accommodate growing demand.

Smiling Table Server takes my order.  I say I'll have a Coke.

I'm a Pepsi guy when I'm not drinking one of the cane sugar glass bottle sodas that populate my pantry.  But restaurants typically limit you to the products of one of the major brands...Coke or Pepsi.  There are some exceptions, but they are few and far between.  So when you ask for Pepsi in a Coke place, they're all like "We have Coke products."  Or vice-versa.

So one day years ago, I decided to come up with a generic term that handled either/or.

"I'll have the house cola," I said to the server.

Me: "The house cola.  Coke or Pepsi.  Whichever you have."

Server, annoyed: "We have BOTH."

Wouldn't you know it, the place I decide to try this out is the one place that has both.

The idea was pretty much abandoned then and there.

And I had a Green River instead.
Posted by tesg at 1:00 PM