I know what you're thinking.

"It's a quarter pound cheeseburger," Smiling Counter Guy replies when I ask.

I know what you're thinking. 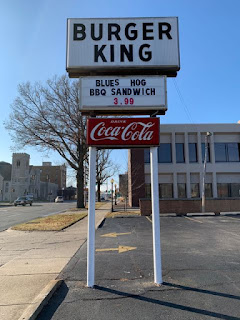 The name is the end of the similarities.  The burgers are grilled, not charbroiled, and more closely resemble Steak n Shake's or Freddy's with their thin, juicy, crispy edge patties.  Which made ordering a single-patty Hooter a mistake, as these patties should always be eaten as doubles.  So if you happen by, just get a double cheeseburger.

The fries are hot and fresh and of the lightly coated and seasoned variety.  They're delicious.

There's two order counters, one for the hot food side ("Burger King") and one for ice cream ("Frigid Queen").  You order and pay separately.  The highlight item according to the locals is the lemon soft serve cone.  So I had one, and...yes.  Wow. That's really good.

The locals treasure this place.  It's busier at 2:00pm than any national Burger King I've ever been to at any time of the day.

This is far from the first trademark conflict with a big name.  For years, Waffle House was known in Indiana as Waffle & Steak because there was already a chain of restaurants in the state using the Waffle House name.  Still is, actually, but the national Waffle House rebranded under their flagship banner a couple of years ago.  Payless Shoe Source is another example.  In the Pacific Northwest, where PayLess Drug Stores were once a thing, they were known as Volume Shoe Source.

For companies that die, it's possible to let a registered trademark lapse and for someone else to jump in and swipe it up.  So businesses sometimes play tricks to keep trademarks dead.  Hardee's, for example, bought Burger Chef a long time ago.  Somebody once wanted to take the trademark and revive the brand, but Hardee's killed the idea by putting Burger Chef's signature burger, the Big Shef, on sale again at Hardee's stores every few years in a couple of old Burger Chef core markets.  They included the Burger Chef logo in promotional materials.  All specifically designed to keep the brand dead.

Waffle House actually trademarked the brand of a dead competitor it itself was founded out of and keeps that brand from being revived by using the name on their own menu.  Thus the reason you see "Toddle House Omelets" on the Waffle House menu.  The ridiculous thing there is I can't find any evidence that Toddle House ever even offered omelets.  They were well known for their burgers and chocolate pie.

Not all this trickery actually works.  A few years ago, a guy decided he wanted to revive Naugles, a Mexican chain Del Taco acquired years ago.  He sued to get Del Taco to acknowledge abandoning the trademark.  Del Taco responded by showing they were in fact still using the logo in their online store where they offered Naugles branded T-shirts.  But a judge decided that wasn't enough, and the result is Naugles is open for business at a couple of locations in California with copycat recipes the guy reversed engineered and customers claim are pretty accurate.

So if there's an old brand out there and nobody's used the trademark in years, maybe you can have it.  Hardee's has never pulled any stunts to protect the Sandy's trademarks the way they did with Burger Chef.

And I know how to make a pretty accurate Big Scot.
Posted by tesg at 2:00 PM