Popeyes originally launched their chicken sandwich in August.  It was such a sensation that locations were overwhelmed with business at levels they’d never seen before.  Lines around the building and down the street.  By the time I got around to trying it, the chain was sold out of supplies, and it turns out the local Popeyes stores never bothered to offer the thing in the first place.

Sunday November 3...Just in time for National Sandwich Day, Popeyes has refreshed, hired more staff, and reloaded, with the intention of making their sandwich a permanent menu item.  The frenzy to get it continues, with reports all over the country of long lines awaiting sandwiches and fights and what not.

Tuesday November 5...I stopped by the local Popeyes mid-afternoon to find cars filling the parking lot, people walking up to the doors, and turning around and leaving.  Huh?  Turns out there’s a notice on the door that the local stores STILL haven’t gotten the sandwich and have no idea when they can be bothered.  So people leave empty handed and head to the Chick-Fil-A next door.  This must be doing wonders for their business.  Two different people stop me in their cars.

“They never launched it here in the first place.”

Friday Noveember 8, Champaign, IL...It’s a travel weekend for me, so I decided to try a Popeyes from the road.  There’s one down the street from my hotel.  Google reviews indicate they have the sandwich.  It’s 4:30pm.

“Not until 7,”Frowning Counter Girl says.

You have got to be kidding me.

I don’t go back.  I go to my hotel and order a Monical’s Pizza.  Screw this.

This has got to be one incredible sandwich to be this much bother.  Chick-Fil-A makes a good chicken sandwich, but it alone doesn’t drive traffic.  When Popeyes sandwich went viral, I read a real food critic’s review of it and several other chain chicken sandwiches.  Chick-Fil-A only came in like fourth.  Popeyes was tops.  The big surprise?  McDonald’s crispy buttermilk chicken sandwich came in really high.

A key part of Chick-Fil-A’s success, especially with women, is customer service.  Everyone is terribly nice, clean, neat, and well mannered.  People love that about them and make a point of bringing it up when recommending them.

Popeyes is the polar opposite.  The staff yells at each other, swears as if they think the counter is a magical barrier that customers can’t hear through, and hardly ever smile.  Some of those people can be outright abusive.  I remember a girl working the drive-thru shouting at her customer “We aint got no daaaamn ice cream!” once.

But they do make my favorite chicken (it would be second favorite if Kenny Rogers Roasters were still around).  Give me a couple spicy thighs or some blackened chicken tenders (they’re unbreaded, heavily seasoned, and fantastic) and that’s as good as it gets.  Good butterfly shrimp too.

What actually drives me into Chick-Fil-A is their incredible chicken noodle soup, which is a seasonal item.  It shows up with the cold weather.  Thus, so do I.

Thursday November 14, Wichita...Not getting a good vibe when I pull up.  There’s no mayhem in the drive-thru.  I go inside.

She cheerfully rings me up.  HOLY CRAP!

I tap my Apple Watch on the payment reader.  “THAT IS SO COOL!“ she exclaims.  “You don’t have to take your card out or anything!” 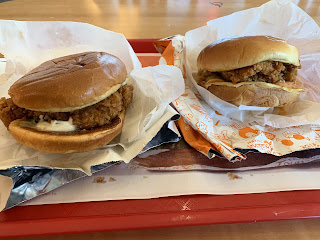 Five minutes later, I have the two famous Popeyes chicken sandwiches in front of me in all their glory.

It’s a better breast filet than anyone else.  Nice and plump with a solid crispy breading that has a bit of flavor all its on.  Seems to be the same either mild or spicy...they get the “spicy” through the sauce they use on the sandwich.  And that sauce is waaay too spicy for me.  But the mild has a really good mayo.  Both have excellent pickle slices that compliment the overall flavor perfectly.

Still, i’d prefer my spicy thighs and blackened chicken tenders to the sandwich, and I can’t get that chicken noodle soup here, so I’m probably not going to change my Popeyes or Chick-Fil-A habits.

Taco John's has been running an ad on social media for what they call "Sauce-a-Lotta Enchiladas".  But when you click on it, the link goes to their website, which has absolutely nothing about them posted.  Way to market, Taco John's.  Apparently this is a limited market test offering of some sort because if you go to their social media feed, those ads don't show up there either.  Also, the ads are now counting down the end of availablilty, which must have been all of two weeks at most.  So...yeah.

The store up the street from the Townhouse of Solitude has them, so I tried them for lunch today.  New Counter Girl Melody is learning the register and slowly inputting my order while being coached.  There's less drama than you would imagine.  I am given the option of enchiladas ala carte, or in a platter.

Apple Pay ensues after some drama about how to take credit cards.  I get my drink cup and head off.

The first surprise about the platter is that I expected it to come with refried beans and Spanish rice.  Not so much.  It's cilantro lime rice and black beans.  Plus there's a mini saled lettuce tomato mix thingy going on.

The enchiladas themselves are, of course, not really enchiladas.  Enchiladas should be softened corn tortillas wrapped around some sort of meat or cheese and topped in sauce and cheese.  These are using flour tortillas, so they're disqualified.  Essentially, they're smothered burritos.  These are what Taco Bueno and Taco Casa refer to as "Chiladas".  Even Taco Bell called theirs "Enchrito" when they offered such a thing, even back in the day when they actually made it with a corn tortilla.  There isn't a lot of red sauce on top, but therre's enough.  There's also nacho cheese.

They're okay.  I doubt I'd order them again.

Melody's trainer is taking her through the dining room and introduces us.  "This is Melody.  It's her first day," she says to me.  "This is Sam.  He's one of our regulars," to her.

Thanks, Girl I've Known Forever and yet don't know your name.

So-called cable TV cord cutters are losing an altername streaming option next year.  Sony is pulling the plug on PlaystationVue, their version of a cable TV service.

I've been a seasonal subscriber to PSVue for the past few years.  I fire it up for football season and drop it in January.  I like the convenience factor of it...when I want it, I just fire up my PS4 and turn the subscription on and it's ready to go instantly.  When I'm done, I turn off the subscription.  You can't do that with cable.  They require install appointments, sending you equipment, returning equipment...it's a big hassle.   Streaming quality has dramatically improved each year.  I have a high-speed pure fiber provider this year and it's been great.  But I guess I'll have to find a new source next year.

Outside of football season, I can pretty well live without it.  I get lots of over-the-air channels between the regular networks and their digital sub-channels.  And my favorite channel (BUZZR, the retro game show network) is available through two completely free streaming services, PlutoTV and STIRR.  If you don't have their apps on your stream box, download them.  You don't even have to sign up for anything.  Just open and start watching their channel lineups.  They don't have major name-brand channels, but they have all sorts of interesting channels with movies, classic TV, and special interest channels (want a channel that does nothing but show internet pet videos all day?  Pluto's got you covered.)

Sorry to see you go, PSVue.  But I won't be hurting for TV.